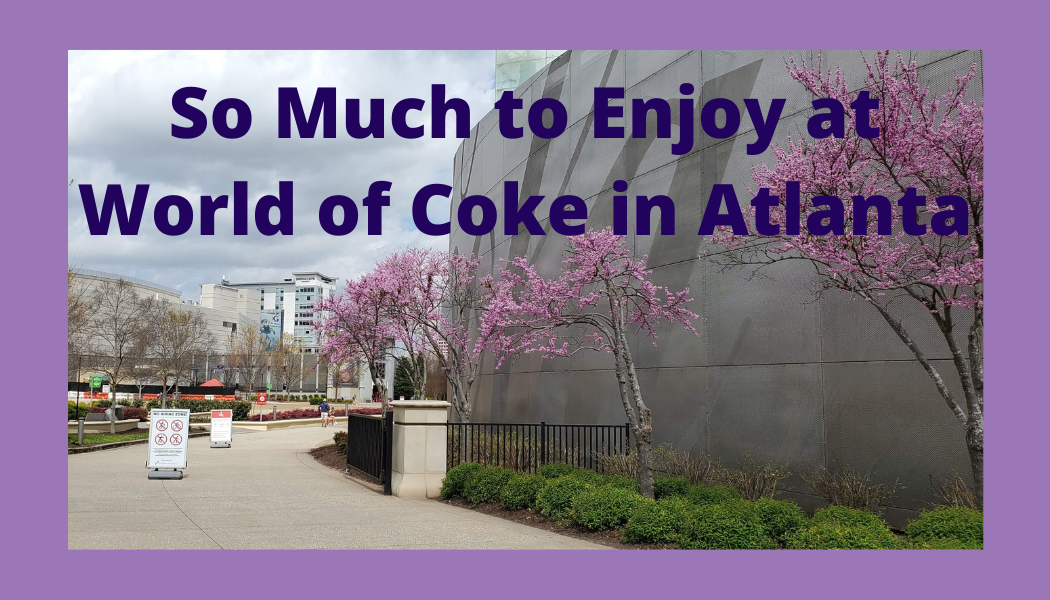 There are so many fun activities to do in Atlanta! We used City Pass to be able to do several of those activities for one price! City Pass includes admission to several Atlanta attractions, such as the Georgia Aquarium, World of Coke, and Zoo Atlanta, for one low price!

World of Coke was one of the attractions I knew nothing about prior to visiting Atlanta, but it was such a neat attraction! There is great information about the origin of Coke and how they keep the secret formula secret! It is definitely worth the visit when in the Atlanta area!

World of Coke is located in downtown Atlanta, just next door to the Georgia Aquarium.

When you enter World of Coke, you go into a waiting area to promote social distancing. The waiting area has pieces of history, as well as a guide that informs you about what to expect inside and shares fun information about the Coca-Cola brand!

There are so many fun exhibits throughout the World of Coke. However, I think meeting the Coca-Cola polar bear at the very beginning of the tour was super fun! He has been a mascot for years and they have a special area for a meet and greet!! Next, we dove into all of the history of Coca-Cola.

I love the sign below and the idea that they designed a bottle to be so unique that it can be recognized by touch or by seeing just a piece or two of it.

They have changed bottle coverings periodically throughout the years or for special occaions, but they glass bottle has remained the same.

Here is a glimpse of some of the various designs through the years.

There is an entire section that walks you through the VERY beginning of fountain sodas and how Coca-Cola orginated.

Coca-Cola was the FIRST and ORIGINAL cola!

Yes…a pharmacist figured out out the formula for Coca-Cola!!

Here’s why Coca-Cola was originally a slight red color!

Coke was so popular and unique, many people tried to recreate their own versions!

People in the United States, as well as around the world, were trying to duplicate the formula and make their own replicate of Coca-Cola!

Creativity and marketing changes began being added to help you ensure you are getting The Real Thing!

Remember that unique bottle they developed? Here is how it came about!

Coca-Cola was so unique and so popular the formula became a secret. Asa Chandler bought the secret Coca-Cola formula from Pemberton and put new protocols in place to keep that formula secret!

The Coca-Cola secret formula has a new owner!

In 1919, Coca-Cola is produced by someone besides Pemberton and Chandler.

However, that secret still needed to be kept confidential to keep others from stealing it. So, a vault was utilzed to keep this secret!

Video cameras are used to help keep the the secret safe. (These are replicas…but we made the cameras in the bottom middle!!)

Currently, no one person knows all of the ingredients of the Coca-Cola formula. This is how they decided was the best way to keep this formula a true secret! The guides at World of Coke told us that some of the people who know a piece of the formula do not even know that the information they hold is part of this amazing secret formula!!

One additional secret: EVERYONE liked Coca-Cola, even when they thought they weren’t supposed to like it! Even Russians during WWII liked Coca-Cola!!

The entire history of Coca-Cola is all about milestones.

It was something unique from the very beginning!

Then, the fun of soda fountains began!!

Coca-Cola wanted to ensure their product was available to everyone, so they kept the price at five cents for half of a century!

The Coca-Cola company also wanted to make sure their product was available for people around the world, not just in the United States!

Fun fact: Coca-Cola was the first non-person to be placed on the cover to Time Magazine!

Coca-Cola has sponsored several activities and organizations through the years. They helped to sponsor Walt Disney in the very beginning of Disneyland and Disney World and have been a sponsor of the Olympics since 1928!

One of the aspects that I loved seeing at World of Coke was all of the trading pins that have been used at the Olympics through the years!

One more reason for me to like Coca-Cola! They are the reason I can pin trade at Disney World!!

Not only has the Coca-Cola company focused on making sure their product is available to everyone, everywhere; it has become varied to meet the tasts of everyone!

For me, it’s so neat to see all of the variety out there….even if I only really enjoy drinking the original!!

They have such a rich history! The Coca-Cola Company developed a color and style that has lasted through the years!

They change to meet the needs of the people and meet the average person where they are!

Here’s an example from the 60s!

Creativity is also part of the joy of Coca-Cola!

Check out these amazing designs from Coca-Cola cans!

I thought this was funny!

Now it’s time to become part of their history! Their address is available where to send your own memories with Coca-Cola to add to their history and to the World of Coke history exhibit!

They even have a short 3-D film that goes over their most basic practices of how they operate!

In addition to getting a souvineer can of Coke at the beginning of the tour, you can try a variety of international Coke beverages at the end of the tour!

Fun tip: You need to try the Beverly….everyone needs to try Beverly at least once! It’s….interesting…to say the least!!

Don’t forget your own souvenir!

Now it’s your turn to visit the World of Coke and don’t forget to check into City Pass!

One of the best ways to visit The World of Coke and many of the other local attractions is to use City Pass! It’s one price for many of the local attractions! The price of City Pass is just slightly more than the cost of only doing the local zoo and aquarium. Basically, City Pass gives you free admission to local museums and the World of Coke when you visit both Zoo Atlanta and the Georgia Aquarium! And trust me, the zoo and aquarium are additional must-see attractions when visiting Atlanta!!

You may also enjoy:

2 thoughts on “History, Secrets, Milestones, & More at World of Coke”