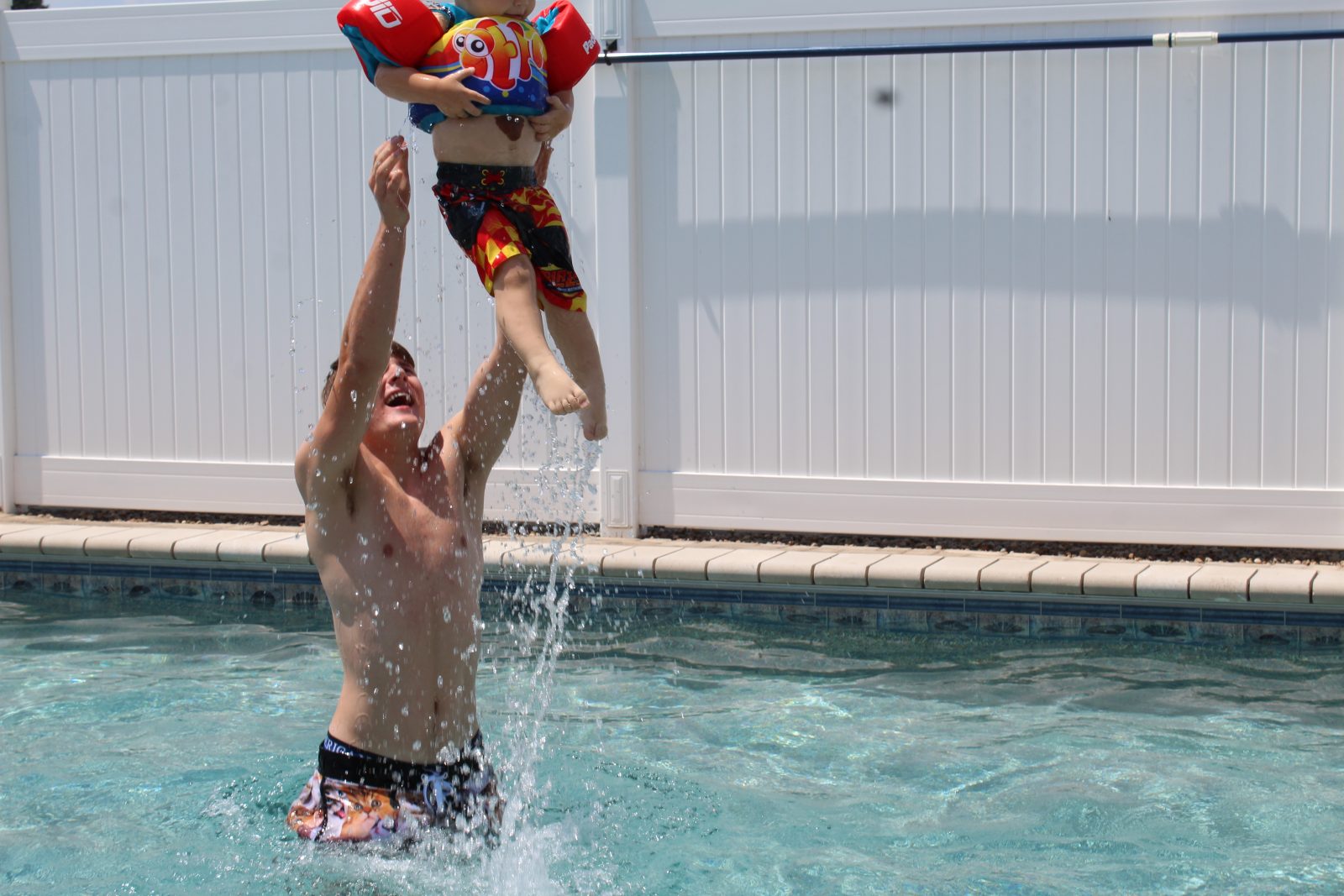 When you have a large family as we do, grandkids come when there are still kids at home. That means the grandkids have some aunt and uncles that are adults and some that are still children and teenagers. This has been quite the experience, to say the least!

When my first grandchild was born my youngest son was nine years old. That put the age between my son and his nephew and my son and his oldest brother about the same years apart.

We have learned through the years there are many pros and cons of having such young aunts and uncles.

We are up to five grandchildren now and the youngest child is almost sixteen and he still needs reminders about safety. He forgets to pick up his things off the floor, he forgets the importance of putting the socket covers back on when he is done using the electronic socket, etc…. Most recently he left all of his band camp items on the floor downstairs. That does not sound like a big deal, but the nine-month-old dumped out his Teddy Grahams and started trying to eat them (a bit hard for her and they were a bit small for them to be that hard). She starts chewing on the random wires he has hanging out of the electric socket and is playing with the socket cover that he has left on the floor directly under the socket. Now, of course, I’m watching and making sure she is safe and redirecting her while having him be aware of the safety hazards he had made, the importance of this not occurring again, and having him now make the area safe for her.

The younger aunts and uncles do not always enjoy the young children being around and getting into their things. One of our daughters recently moved to college several hours away. Thus, she is no longer using her bedroom on a regular basis. Because of this, a bunk bed was added to her room (not taking away any of her stuff or her bed) and her large walk-in closet was changed slightly to make it a good toddler sleep-over/nap room. She was less than pleased by the changes, even though she did not lose anything besides a little bit of empty space. The younger aunts and uncles may also not enjoy young children as much. They may not like babies or younger children and no like being responsible for helping to clean up after them at times or watch them while the older sibling is at work and the babysitter had to cancel. Again, nothing detrimental to the younger aunt’s or younger uncle’s life, but an inconvenience.

However, there are also many, many positives of having such young aunts and uncles!!

Younger aunts and uncles tend to have more energy and stamina! They can fly the toddler around like an airplane for an hour without wearing out when a slightly older uncle might not be able to do this for quite so long. They are old enough they can take the child places and do activities with them outside of the home when the grown-ups need a break.

Younger aunts and uncles are often fun for young nieces and nephews. The younger children love to be around them and want them to play with them. The young children know their younger aunts and uncles can meet their needs (get them a drink, get them a snack, etc..), as well as just have fun with them. They can watch movies with them, sing songs with them, and build with blocks with them. (I recently heard my 17-year-old singing along with Baby Bum three rooms over because he has heard it so many times!) Another positive—this one is for the younger aunts and uncles

When teens have nieces and nephews around it is a great opportunity to teach parenting skills! You can help the teen learn how to parent, in real-life situations. I’m not saying the teen is in charge of all of the parenting of the child, but the teen can learn the basics and help with being a consistent “adult” in the child’s life. For example, the teen can learn what a toddler or infant can eat and what is not safe for that child to eat. The teen can learn how to keep the baby safe, change a diaper, fix a bottle, warm-up breastmilk, and the importance of a bedtime routine. These are all life skills! Now, hopefully, the teen will not need those life skills in the near future, but the teen will have those skills once he or she is an adult, making parenting his or her own child a little bit easier due to the experience with the nieces and nephews.

On a personal note

With all of our children who are not already parents, the one who is the best with the nieces and nephews is our second youngest. He is fantastic with our grandkids! Like any teen, he doesn’t really want to change poopy diapers or pick up smashed bananas off the floor, but he can care for the children well. He is good at setting limits, making the children follow the guidelines set by their parents, and simply playing with them and having fun. He is the uncle that will take them swimming in the pool in the backyard, feed them ice cream, make sure they eat their fruits and vegetables, make them pick up after themselves, and remind them that “mommy said no.”

He is also the one that will ask them “What did grandma say?” or “What did mommy say?” before giving them something he is questionable about because he will not be played by the five or six-year-old! He has learned skills that will make him a great parent in the future, and he has come to an understanding of why parents set limits, why he wasn’t allowed to do certain things when he was a small child (ex. run around a restaurant), and he has learned some valuable lessons about child development and nutrition. These are not things he could have learned as easily from a book or by us talking about them. His real-life experience taught him things that will make his adult/parenting life just a tad bit easier (especially considering he’s our child that has to learn by experience! LOL)